You are here: Home / Archives for Arvest Bank 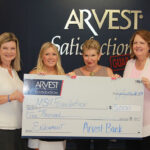 Arvest Bank continued its support of higher education in the Ozarks by donating the final installment of its pledge for Missouri State University-West Plains’ Endowed Professorship of Business. The funds helped university officials raise the minimum $250,000 needed in donations and pledges to endow the university’s third professorship. The professorship has been awarded … END_OF_DOCUMENT_TOKEN_TO_BE_REPLACED